“Beads talk to me”, says Dusti when asked what she loves most about owning a bead store. “I love the sparkle that they add to any project”. It was 30 years ago when Dusti noticed the beautifully beaded cabochon pendant of her coworker, Rose, and asked how she could learn to make one of her own. Rose graciously offered to teach Dusti over their lunch break and in only three days Dusti had finished her first project and was hooked on beading. The two coworkers continued taking their lunch break in unison, weaving together seed beads and a life-long friendship. It was at this point that Dusti discovered the overwhelming joy of bead stores. She remembers being mesmerized by the strands and strands of “bling”, and as Dusti says, “the rest is history!”

Dusti’s husband and partner in crime, Eric, is the first one to open the shop and the last one to leave. Eric believes that great customer service is the foundation of Beads at Dusti Creek and is dedicated to the store’s success. “The best part of Beads at Dusti Creek is the people, interactions, and relationships we have with our customers. Our goal is to simply serve the community by bringing them the best products possible.” As the store mantra states, “We put the world’s best beads at your fingertips”.

And we can’t forget Beau!  Beau is Eric and Dusti’s 14 year old hairy son, a little Pomeranian. He is known as the “Store Manager” and most often gives great costumer service when other dogs come into the shop. His favorite part about owning a bead store is being with his family all day.

Dusti, Eric, and Beau invite you to visit Beads at Dusti Creek and discover your own passion for beads. 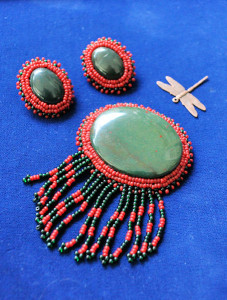